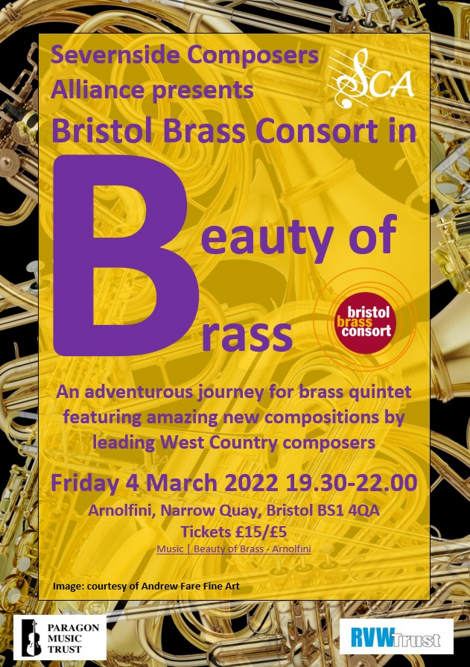 A concert of New Music with Severnside Composers Alliance.

Bristol Brass Consort has been entertaining diverse audiences for over 30 years. Their music covers a wide spectrum: folk music, fanfares, show tunes, seasonal and sacred music, jazz and classical music spanning six centuries. They have played at festivals throughout the UK and Europe, and on BBC television and radio. Over the years they have commissioned new works from many living composers.

Severnside Composers Alliance (SCA) invited Bristol Brass Consort to collaborate in a creative project. They agreed enthusiastically and, following a call-out in November 2019, eight outstanding new works for brass quintet by SCA members were selected. At the concert on 4 March world premieres by leading Westcountry composers will mingle with vibrant and showy pieces from Bristol Brass Consort’s regular repertoire.

Severnside Composers Alliance was formed in 2003 under the leadership of Richard Carder by composers based in the Bristol and Bath area to promote performances of their own music, and to stimulate a wider interest in the composition and performance of new music in the region. Dr. Jolyon Laycock was appointed Chairman in 2011. SCA promotes an annual concert series plus an informal programme of composer talks and educational activities. SCA is part of a national network of similar organisations in Brighton, Birmingham, Portsmouth, London, Manchester and Wales.

Save £5 when purchasing two CDs with discount code "twofor15". Dismiss